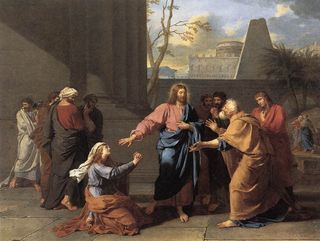 uk.reuters.com - Page by Jeffrey Heller - A Palestinian woman runs carrying a girl following what police said was an Israeli air strike on a house in Gaza city July 9, 2014.

I am still debating my choices of scriptures to preach this week-the Gospel lesson about the Canaanite woman, Isaiah and the covenant extending beyond the normal boundries to eunuchs, or Joseph meeting his brothers in Egypt.  They are all painfully relavent this week in a world of broken covenants, elusive truces and alienated people.  Here is a quote from a sermon I preached in 2005 entitled "Overlooked and Underconsidered" to ponder:

Everything seems to be working against this woman-gender, race, religion, class and nationalism-to find help for her daughter.  It must have been quite the spectacle to have her throw herself at the feet of Jesus.  Disciples and spectators alike must have been embarrassed to have her there.  She must have been driven by desperation.  Maybe now we can better understand Christ’s original negative response, when he says, “Let the children be fed first (referring to Jews) for it is not fair to give the children’s bread to the dogs.”  There is no getting around the fact that Jesus has just “dissed” her.  Jews considered dogs to be scavengers and unclean animals.  Every reference to dogs in the Bible is negative (much to the despair of dog lovers like me!).

For a moment she is turned away by a great spiritual leader, which to many would feel like they were being turned away by God.  That’s why it is so hard when our feelings get hurt in church.  We expect to experience the sacred grace of God when we come to church or approach a minister, and if we are hurt or overlooked for the moment, then it effects our core spirit.  Where else will we find the sacred in our lives?  This is what disturbs us in this Gospel Lesson.  How could Jesus compare anyone to a dog or say a thing like that?  This story hits us in a place of fear that maybe God finds us to be really annoying.  We don’t belong, we don’t deserve the bread, others are more important.

Genesis 32 "Wrestling with the Stranger" 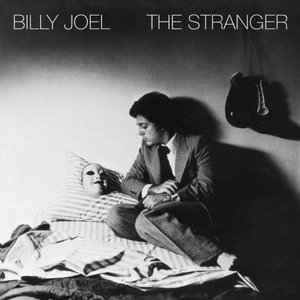 If you are looking for a late sermon illustration on Saturday, listen to Billy Joel's song "The Stranger" and think about in terms of Jacob's wrestling with a stranger.  I only had a minor spot in my sermon for it.  Let me know what you think about the about the connections.  Below I have posted my draft for Sunday:

This morning I would like to talk about wrestling.  I don’t mean the kind where huge men bellow insults at each other and jump off the top ropes to maim their opponent, all by pre-designed script.  (Which is much like watching a Congressional debate!)  I mean the kind of wrestling where I grew up in Iowa, a sport for fast, lean, and often small guys.  Iowa was an amateur wrestling Mecca (with 30 NCAA championships in the last 40 years are ISU or Iowa Univ).  Since we are talking about Jacob wrestling with a stranger, I thought about a few lessons I might share from observing the sport of wrestling.

The point of wrestling is to gain control of your adversary, put them on their backs and pin their shoulders to the mat.  You can score points by throwing your opponent to the ground, or escaping from their clutches, but everything ends if you can gain a control hold that allows you to pin the shoulders.  Its very hard to do, and few matches end with a pin, and with two very good wrestlers, there are very few points scored.  It is actually pretty boring watching two guys struggle on the ground with little change to show for it (again, much like Congress!)

Successful wrestlers had to do more than just beat their opponent.  Wrestlers had to first gain control of themselves and make weight.  Wrestling levels the playing field by having weight categories every 10 to 12 pounds, so to be competitive wrestlers try to lower their body weight to move down a category, to be at their most effective competing weight.  You could tell the young wrestlers at Thanksgiving.  They were the guys eating carrots and celery and drinking a pitcher of water.  To sum up, a wrestler much first control themselves to even have a competitive chance, and then they strive to gain complete control of their opponent by pinning their shoulders to the floor, but the most likely no one is going to gain that kind of advantage so they just struggle on the floor and a referee decides the winner.  All these elements are in Jacob’s wrestling story.

We are jumping into the middle of the story in chapter 32, and it would be like watching Rocky III first, without seeing one and two, so we need some context.  Jacob’s life is defined by being the second son.  Birth order always plays a role in our personalities.  First-borns, middle and youngest children all have their opinions of each other and their life predicaments based on birth order in the family. This means everything in a culture where the first-born male inherits the title of family patriarch and controls the wealth and decisions of the whole clan.  So Jacob is the second son, and he got the brains.  Esau is a big, hairy guy who loves to hunt.  He’s a bro, as my kids say, into sports and guy stuff.  To complicate matter, Isaac the father favors Esau, and Rebecca the Mother, favors Jacob.  (“Mom loves me bes”t is an age old issue.)  One day Esau comes home hungry from the hunt and says to Jacob, “Give me some of that soup you made.”  Second-borns and middle children, you know how bossy first-borns can be.  Jacob thinks to himself, I don’t want to make soup for this dumb jock the rest of my life, so he says, “Sure Esau, just give me your birthright.”  Now that takes cajones.   Here’s your soup, big bro, and why don’t you let me handle the family business in exchange.  Esau says, “If I die of hunger what good is a birthright.”  He really didn’t get finance.  Maybe he thought Jacob was joking, but Jacob is going to hold Esau to this.

The real divide happens as the father Isaac is dying.  Isaac senses the end is near and calls in the first born son in order to bless him.  Rebecca and Jacob hear this and plot to steal the blessing, Jacob puts on sheep skins to fool his blind father into thinking he was a big hairy man and steals his big brothers blessing.  This is the breech that will last for 20 years, and Jacob has to flee his brother’s anger, because Rebecca is afraid that Esau will kill him.  So Jacob has wrestled with the family destiny and the role culture and inheritance put him in, but despite momentary advantage, who losses this match.

So Jacob now has to cross the border fleeing violence and becomes what some might call an illegal immigrant.  To survive he has to work for someone else in a foreign land.  Laban, his uncle, gives him a job herding goats.  Jacob falls in love with Laban’s daughter Rachel and they agree that he can marry her if he works for seven years.  After seven years, Jacob asks for the marriage and Laban says, “You misunderstood.  My oldest daughter, Leah has to marry first, so if you want to marry Rachel it is another seven years.”  So do you feel bad for Jacob at this point, or are you feeling like he has received a taste of his own trickery?  There’s more to the story, but basically Jacob gets tired of Laban using him, doesn’t like working without a green card, and when he talks with his wives they are not very happy with their father either, so they decide to leave.

Going home is problematic.  Esau is still there.  Jacob sends scouts and a messenger and finds his brother is traveling with 400 men in arms.  We may think a man with two wives, 10 children and a lot of goats as a big family, but it is no match for Esau’s company of warriors.  We enter the story with Jacob sitting alone on the eve before meeting his estranged brother, and he is afraid for his life.

Now we are finally at Jacob’s night of wrestling.  The text says Jacob is wrestling with a man, a stranger.  How or why would you wrestle with a stranger?  Where does he come from?  It sounds much like the stuff of dreams, tossing and turning between waking and sleeping before facing a major test or conflict in life.  It is the night before a major family or class reunion, or a family funeral where conflicted parties are obligated to be in the same room together, or where you have to face your past self, and past relationships, your ex-spouse is going to be at the funeral and who do the children sit with?  Is Jacob wrestling with his conscience, or an angel, a demon or with the living God?  Or can we tell the difference?  A person can wrestle their whole lives with an adversary and only years later they were struggling not simply with their brother or sister, but with an unknown stranger within.  This wrestling encounter reminds me of Billy Joel’s hit, “The Stranger,” where the lyrics talk of us trying on different faces not our own, or seeing a stranger in the face of someone we love who hurts us, and near the end he sings:

Though we share so many secrets
There are some we never tell
Why were you so surprised
That you never saw the stranger
Did you ever let your lover see
The stranger in yourself?

Like most wrestling matches, there is little action and a lot of stalemate, and now it is near morning.  This stranger must leave, which is the clue that this is a spiritual entity that can’t stick around in the light of day.  He dislocates Jacob’s hip, yet is still in his clutches, and Jacob demands a blessing before the stranger departs.  A blessing?  Jacob’s whole life has been a struggle to win the blessing, by deceit if necessary, and here he is demanding another blessing.  He receives the blessing, a new name.  No longer will he be called Jacob, the trickster, but Israel, the one who wrestled with God and humans and prevailed.  That is a curious blessing, quite ambiguous, as Jacob’s life is often is.  When Jacob prevails and gets what he wants-birthright, Isaac’s blessing, Rachel, wrestler’s blessing again-he is also broken in some way.  Fleeing Esau, fleeing Laban, a broken hip-maybe because he is supposed to stop running away and face into things.

“Who are you?  What is your name?” Jacob demands.  He doesn’t get to know, but he is blessed.  But Jacob is under the impression that he has seen God face-to-face, and somehow lived stand, broken hip and all.

And then there is Esau, and now Jacob is crippled and totally defenseless.  Jacob parades his poor family out there and all is in Esau’s power.  He’s bowing to his brother as to a potentate, and here comes his bro, to hug and kiss him without even waiting for any other words between them.  And they both weep.  A wordless blessing of tears shed, for all that was lost in rivalry, lies and deceit; hearts long broken. The wrestling ends with no victor declared, which is the final victory won-amazing grace.

Click on the globe to see where I'm "blooming."